Today is National Navy Day.  In honor of the Navy, the Sisters In Stamping created projects featuring Night of Navy.

Navy Day is the original day to celebrate the U.S. Navy, and though this celebration officially was replaced by Armed Forces Day (Third Saturday in May for the U.S.) in 1949, the celebrations of Navy Day continue on, especially within the Navy itself. Additionally, research undertaken in the 1970s showed the ‘true’ birthday of the US Navy to be October 13th, and the date was officially changed – however, the entrenched celebration still holds sway, and October 27th is still generally celebrated instead.

The 27th October was suggested as a date to recognize the birthday of one of the Navy’s supporters who was Assistant Secretary of the Navy in 1897, Theodore Roosevelt.
Before 1949 the U.S. Navy would send its ships to various ports for Navy Day, with 1945 having a large celebration; the current President (President Harry S Truman) reviewed the fleet in the New York Harbor, and there are pictures of ships docked along the Hudson River for the celebrations.
Navy Day was last officially observed on October 27th 1949 when Louis A. Johnson directed that the U.S. Navy’s participation in such events would occur in May, On Armed Forces Day. He was the secretary of the newly created Department of Defense.
The Navy League was not affected by this decision as it is a Civilian Organization, and they continued to organize events as before.

I should have created a more masculine card for this week's theme, but somehow the Detailed Floral Thinlits was calling to me.  I've been meaning to use it for a while now and this was the perfect time! 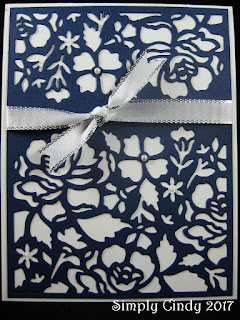 I decided to keep it very simple as the thinlet's design did all the work for me.  I added the silver edged ribbon and some pearls.  I used a simple Whisper White card base and the card took me 10 minutes the most!  I love it; will be making more of these for sure!

Please check out the other SIS creations here.

Thanks for looking and have a wonderful day!

TGIF!  Am I right?  I thought this weekend would never get here ;)

The Calypso Coral in this combo made this a challenge for me.  So, I have to admit that I used very little.  See?  LOL! 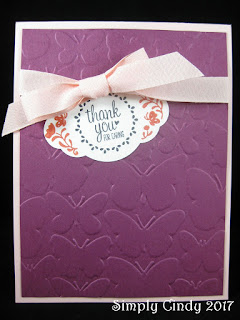 My base cardstock and ribbon are Powder Pink, the butterfly embossed cardstock is Rich Razzleberry, and the flowers of the stamped image is in Calypso Coral.  I'm not sure that it really works on this card, but it's what I came up with :)

Thanks for looking and check out the other creations here.

Have a wonderful day, weekend, etc!

Cindy
Fairfax, Virginia, United States
Hi! I love to stamp and alter items with papers, ribbons, and other embellishments. I enjoy time away from my full time job when I'm able to sit and create. Thanks for looking!

If you have any questions, please feel free to email me:
simplycindycrafts@hotmail.com

All content, including text, photographs and design work is COPYRIGHT Cindy Blekas/Simply Cindy Crafts. Please use my ideas for inspiration purposes only. They can not be used for publication or contest submissions.