November's challenge certainly was a challenge!  We all love to stamp, so not being able to use a stamp was difficult.  But, I love how these cards turned out!  Here was the challenge: 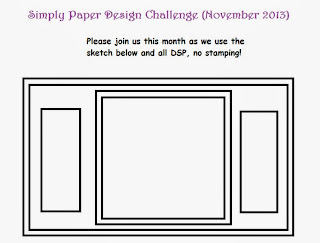 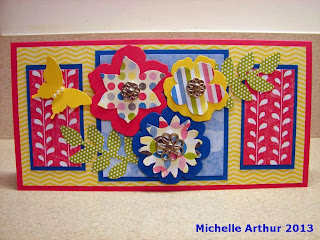 The second card Michelle made has a totally different feel to it.  I find this card very elegant and beautiful.  I think it is all DSP - gorgeous, Michelle!  The blue is just striking and the butterfly really seems to come alive against the blue - love this card too! 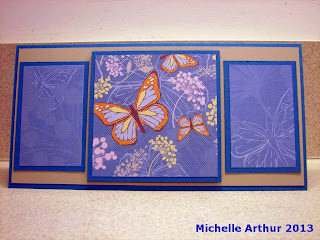 Regina also made two cards for this challenge!  On this card, she said she did cheat and stamp, but I wouldn't have known had she not fessed up ;)  I thought it was on the paper already!  This card is a great male teenager card.   So, nice job, Regina!  I'm sure your son loved it too.
You can make some pretty awesome DSP yourself :)  To read more about this awesome 16th birthday card, please visit Regina's blog here: 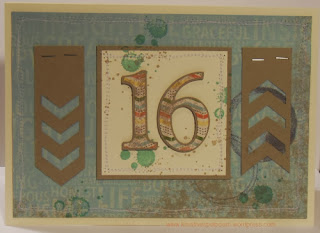 Regina's second card also has a totally different feel to it.  It's fund and upbeat!  I love that Max's name is the highlight to this card.  I'm sure it made his day brighter and fun filled!  To check out more about this card, please visit Regina's blog here: 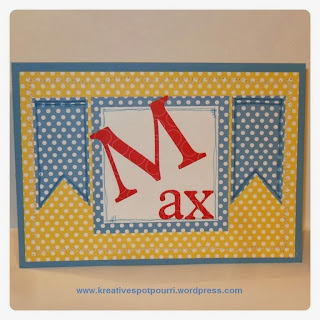 Lastly, here is my card.  I'm not sure why there is a pinkish hue to the card because there is no pink on the paper or embellishments!  Anyway, I saw snowflakes when I looked at the design and decided to use my new DSP.  I also wanted to use my snowflake framelits.  After I cut out the snowflakes, I put them in some different snowflake embossing folders and ran them through the Big Shot.  I like the way they now have texture to them.  I love the new fancy metal embellishments SU! came out with in the holiday catalog and decided to add them to each snowflake.  I popped each snowflake up with dimensionals.  The card still looked like it needed something, so I grabbed some matching ribbons (love the new silver ribbon!), doubled them up, and wrapped them around the card. 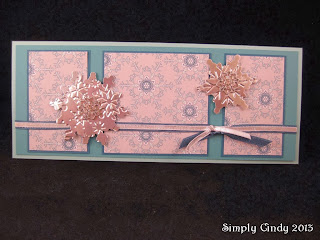 I thought this was a difficult challenge, but a good one.  Sometimes, you can create some great cards with just paper and a few embellishments.  It would be fun to make some matching gift bags to these cards.

Thanks for looking and have a great day!
Posted by Cindy at 6:00 AM No comments:

I have a couple friends that will be having baby girls :)  I have a shower this week, so made a baby card this weekend.  I CASEd this card from Julie A.  I just thought the duck was so cute!  I didn't have the same designer paper she used, but found some cute baby feet paper.  So, I matched the colors in the designer paper with my SU! cardstock and got to work.  Since I had my polka dotted embossing folder out, I decided to go crazy and gave the duck's background and hearts some texture too! 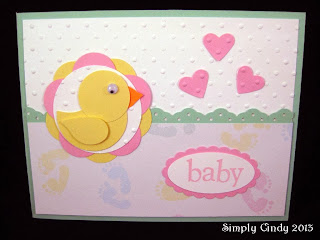 Thanks for looking and have a great day!﻿
Posted by Cindy at 6:32 AM No comments:

I was a guest designer!

My sister (Debbie Naylor) asked me if I'd be a guest designer for her Sisters in Stamping group/blog.  I was honored and think it is kinda funny since we really are sisters!  She picked the right month for me.  We were to use some new DSP (designer series paper) from the holiday catalog to create something.  Well, anyone that knows me knows I love DSP!  Somehow, I feel more creative with paper.

I started to make snowflake ornaments with the snowflake paper, but they were just not coming out how I'd envisioned.  So, I scrapped (no pun intended!) that idea and decided to use the Season of Style papers instead.

The first project I made was with a shadow box frame.  I covered the mat with DSP and used the SU! Old Olive marker to color in the mat's inner edge.  I then started pulling current stamps, framelits, ribbons, punches, etc.  I had not used the Hearts a Flutter framelits yet and thought a little Christmas banner would be cute.  I used my Big Shot to cut them out in coordinating cardstock.  I then pulled my silver glimmer paper and colored in small areas using SU! markers (old olive, cherry cobbler, and daffodil delight).  I then punched them out with the little Christmas punches that carried over into this year.  I adhered them to the banner pieces and decided to add just a little more bling by adhering some rhinestones to each piece.  I tied some bows and the banners were done.  I had some bakers twine, so thought that would make a good "rope" for the banner. 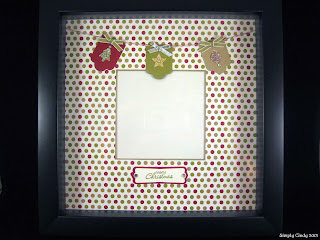 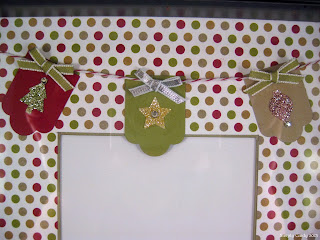 I have been wanting to make a luminary for a while now.  After pulling the current Christmas items, I decided I had to use my ornament paper piercers!  So, I pulled the vellum out first and cut and scored it to accommodate the ornament's size.  I then pierced each side of the vellum.  I then adhered DSP to the top and bottom on the luminary and added the pearls.  The bottom is open so that you can cover the candle, but the top is completely covered. 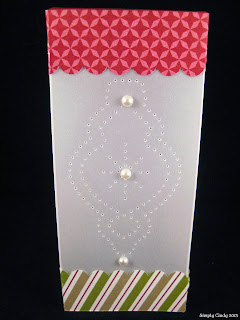 I had a heck of a time trying to get a good picture with the little battery operated candle inside - I see I wasn't straight holding the camera either - LOL!  In hindsight, I should have added some ribbon! 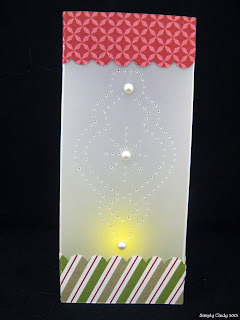 I wasn't sure I liked how the luminary turned out, so I decided to make a covered cork board.  I had some 6x6 tiles, so I adhered them together to give the project some depth.  I then covered them with this beautiful DSP.  I wrapped the whole thing with the new chevron ribbon, but you can't see it :(  I then used the beautiful seam binding to make the "holding" ribbon and made another bow.  I used the vintage designer buttons, adhered to brads, and put some pearls in the middle of the buttons.  I also put some pearls in the middle of the chevron bow at the top of the board.  But, I know it is hard to see. 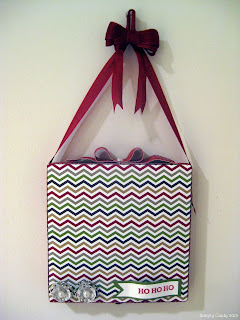 I had a great time making these projects and it certainly got me in a festive mood!  I really want to start making Christmas cards now :)  Please be sure to check out Debbie's wonderful creations on her blog and also check out the Sisters in Stamping creations as well!
Have a wonderful day and thanks for looking!
Posted by Cindy at 7:57 AM 2 comments:

It's All About the Paper

This month, Michelle and I wanted to challenge ourselves by only using designer paper, no stamping!  Grab your papers and join us! 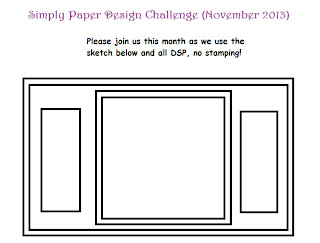 Cindy
Fairfax, Virginia, United States
Hi! I love to stamp and alter items with papers, ribbons, and other embellishments. I enjoy time away from my full time job when I'm able to sit and create. Thanks for looking!

If you have any questions, please feel free to email me:
simplycindycrafts@hotmail.com

All content, including text, photographs and design work is COPYRIGHT Cindy Blekas/Simply Cindy Crafts. Please use my ideas for inspiration purposes only. They can not be used for publication or contest submissions.